2020-MAY-09 Info: Please help spread the word about the Songwriting Competition and help it reach 15 participants per month on average

Oh, No problem. I just wanted to make sure I hadn't missed something. Thank you!
Top

Since the "(sub 4) participants balance vote" system applies, and to set another example how the feedback could work (sans the technical bonus info, you don't need to do this), here is my feedback for every participant.

The first entry of the competition, and inspired by 80s electronic. What I definitely like here, are the lead synths. They tell a story and give an airy feeling. But the beat and the bass is maybe pushing a bit too hard to my taste (I was listening to the WAV by the way - not the Soundcloud or MP3 version). Though maybe this was intentional for this theme.

Technically, this is a very harsh mix - at least on small speakers (2" active ones), here the bass just completely vanishes. This production is heavily 80s inspired, but you should maybe take another look at the low mids (around 300Hz) and the sides around 6-10kHz. The former vanishes on small speakers, the latter is ear piercing on small speakers. This also uses some very strange sounding reverb. As if it's metallic, not warm/organic. I'd definitely go more organic here, dull the reverb out, reduce the mids... but that's just me.

Overall an interesting concept that needs to grow on you.

At first, I really thought "wait, is this voice from Vocaloid", but the longer (and the more often) I listened to the production, the less the intro section bothered me (which also starts fairly abrupt - a "count in" could maybe work). Also, you can't chance your voice - but in places, it does really sound artificial and heavily pitch corrected. Then again, what instantly clicked with me (just as with ryanc's production), was the instrumentation. It's a nice blend of pop which blends into country the longer the song is on (guitar chords, slide guitar). The Saxophone is a bit irritating though... could have maybe played a bit higher the first time it got introduced. The the end part was okay. The vocals sing about "autumn" in general, which are supported by the guitars and the choir (doubled voices). I must admit, I had this track on loop a couple of times.

Technically, there are still a couple of things that can be done though. Addictive Drums 2 in itself is a great concept, but I always disliked the over-processed sounds/presets. In this case... the snare just sounds "flat" and dead - maybe more sustain (more rattling of the snare bottom) would work a bit better. Definitely not working are the toms. With this song I expect a bit more "boom", but instead I get some tock's on a cardboard box. Not your fault - Addictive Drums needs a lot of love with proper channel setups. The kick and the hihat are no problem though. I don't have much to say about the guitars and bass - they work great together. Although the bass could be a slightly bit more "grungy" (hint: copy the channel, add distortion to the second, filter the signal a bit, then mix along again) - just to cut through a tad more (especially in small speakers).

The vocals could maybe be treated a tad different as well. In the more quiet section, the vocals sit nicely on top - but you clearly hear that the reverb (room or chamber) doesn't really fit. I'd maybe cut away more of the high frequencies (from the reverb), or try a different room/delay combo. But that's just me. You definitely need to work on the volume of the vocals... in the more busy parts, they do drown in the rest of the arrangement. Maybe try giving them 2-3dB more in these parts while leaving the rest untouched (which should also blend better with the chorus).

All in all, great production. I'd definitely love to hear more from you.

This entry is very... experimental I would say. In cases, it even reminded me of my early days in the audio realm and toe-dipping into Synthesizer/Industrial Music (in fact, at some point I felt that I'm listening to my Kurzweil K2000, or maybe even a Roland JVx050). However, this comes from Magix instruments and Synapse Dune. Really threw me off guard. I definitely like the chord progression and the slight melodies, which does give the impression "I'm walking through the city". But it takes nearly 3 minutes until the experimental off-beat production finds a suitable rhythm and synchrony that sets you in some sort of trance state where you just want to shut off your brain and keep walking. And then it only holds for about 1 minute until things start to fall apart again.

I do like the idea of having an inner cinema, but I really miss the cohesion here. Which brings me to the technical aspect. You could have definitely experimented more with effects. This production could (for example) work well with Binaural Panning, subtle delays, a tad more reverb. The "chirping" noise from the left side is a bit annoying after a while. Everything just feels... static and monotone (maybe some more hihat work could remedy this).

It does work fairly good on small speakers and also earbuds (although, due to the technicalities of these things, the bass is a bit too strong for my taste) - meaning it's not too overly harsh. But it sadly feels like you ran out of time and just cobbled together what you could, to make it (definitely compliments for the effort). If you can get back to the production, you should consider that.

ryanc - The Day October Comes Around

I initially thought "this is the clear winner production of SWC014". But after listening to the production several times, it wasn't as clear cut anymore. The song is definitely inspired by late 90s contemporary pop (in fact, the vocals have a bit of a Green Day-ish feeling). I definitely enjoy the piano melody, chord progressions and voice melody. The voice does also fit.

However (technical): the vocals feel a bit off. Not necessarily the words/the meaning, but the pitch and the mix. Especially the mix. I tried to play this on several listening environments, but the vocals always stick out as "tacked on", not "glued in". And there is actually an easy fix... use a different reverb, or the same reverb as the piano. If the reverb doesn't work, maybe use a delay instead and use the reverb as support. Just... adjust things a bit. The reverb for the voice right now feels artificial, medium and very reflective room. While the rest of the production uses a more warm tone. This in turn "cuts off" the vocals from the rest of the song. You should try going back to that. Give it a little "more".

Mix wise... on small speakers, the instruments do cut more through. Especially the drums. On studio speakers, the drums drown a bit (hats especially, could also be spaced out a bit), in fact, so does the bass. The reverse piano or reverse guitar effect as transition could also be a bit louder. If I'd mix this production, I'd also maybe toy around with automation. Especially the strings, also cut them slightly "higher" (frequency wise) to let the bass and piano breathe a bit more, while letting the strings sit more on top. But... all of this is personal taste of course.

Overall, a great song about love and appreciation for your family.

This month was definitely not easy to choose a clear winning entry (equal or less than 4 entries). To me personally, I had to decide between two great productions with vocals. And for of the instrumental productions, I also couldn't decide clearly. I understand that it's not easy to judge productions of different genres with each other, so I focused on "initial impact" - and here I initially had a clear winner. Until my habits as audio engineer to "over-analyze everything" kicked in.

Let me say, that you all did a great job. And I hope that you all had a lot of fun while doing so. Here is my vote for MC014

Ladies and Gentlemen, here are the results of Songwriting Competition 14

The winners podium consists of:
We had one tie (MarkS has 1x 10pts, ollyaudio has no 10pts), <4 participant rule in use (staff comments and votes)
We have no disqualifications
"Sole (License) Winner" rule applies

Criticism: The given feedback is still a bit sparse in places. I'd still love to see this improved for SWC015.

Here are the results as chart in image form: 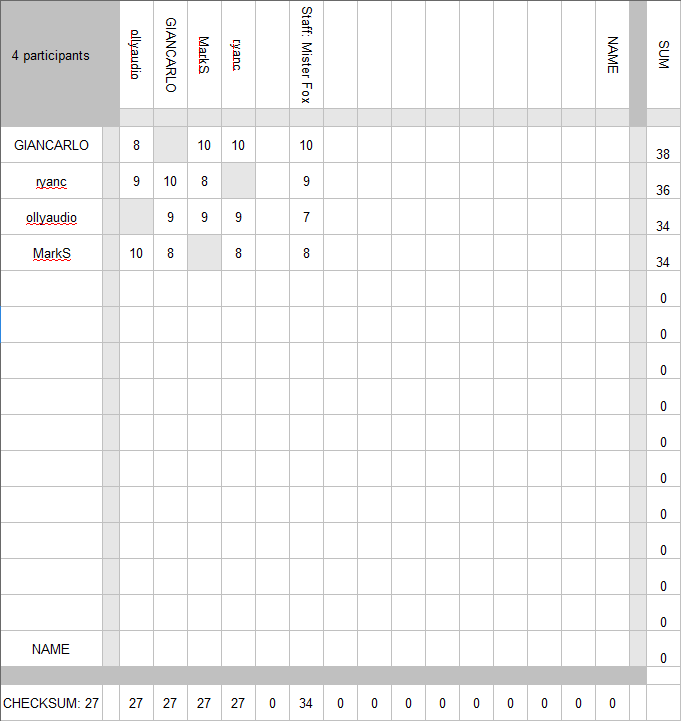 Thank you so much for your participation.

We'll now perform with the usual. Since the "Sole (License) Winner" rule applies, only the top spot can select something from the license pool. Selecting licenses is handled in public, please. After that, please get in touch with me (via PM) with your contact data and what license you picked. In case of the "Bjulin Waves" sponsorship - the winners podium (in case of MC014, the sole winner) can additionally select one "Inspire Me" package on top of the license selection (please mention that in the PM).

As usual - you're not forced to pick up anything. You can pass and therefore offer more to select for the next person in line (if there is a spot existing / not available for "sole winner" mechanic). Just let all participants/winners/the staff know in a timely manner.

Feedback about the "Songwriting Competition" is welcome (please do so here).

See you in in the next challenge!
Top

Hey! Thanks to all the participants for the kind words and RyanC and Mister Fox for the detailed feedback!
I´ll remix the song based on the critiques. I only wish I have a real drummer!
Regarding the licences, we pick the SYNTHMASTER 1+2 BUNDLE from KV331 AUDIO. I want to start playing with wavetables.
Thanks again for the opportunity and we´ll see you in the next competition!
All the best,
GIANCARLO
Top
Post Reply
24 posts