2020-OCT-21 Info: Thread updated, your feedback is still needed! Please join the conversion on overhauling the Bonus Point Mechanic for the Songwriting Competition

Okay, so, I'm only entering to entertainz

I used some more, but I'm not near my computer, this is more a show of support for SW than what could be serious, although you can take this as an entry, although its probably far of the required style

It is the 25th February 2020, 4:30am GMT+1/CET - this month's Songwriting Competition has official ended

Kind of unexpected outcome - not going to lie. No movement up until the very last day, then only 2 entries.

How do we go from there?

Over the course of the next (hopefully) 24-48 hours, I'll gather all links into one post and hot-link to that from the first post of the thread. So please, check your links again. Mistakes and hiccups do happen on the internet. We then perform with the "public vote" system.


We have 2 participants. That means that each participant can vote for 1 tracks, the staff will willcast a balance vote.

Keep in mind of the overhaul of the Rules and Guidelines. As long as we're not exceeding 20 participants, let's give feedback to all participants and(!) cast your vote for all of them.

It is also recommended to cast your vote in collective form through the "Spoiler" tag:

Please use the forum username of the participant to make it easier during the score collection to address what vote belongs to whom.

Please also take note of the Rules and Guidelines (on giving feedback (mandatory for all participants, failing to do so results in a disqualification).

Feedback from non-participants is highly encouraged (voting not needed!). The same goes for entries after the deadline, or those that do sadly not count for the current running game. Musicians and Engineers are always after constructive criticism. This is what this forum is about.

Have some general feedback? Please voice your feedback/opinion/concerns here:
viewtopic.php?f=6&t=97

Please have an eye on this thread!


There is a GLOBAL COUNTDOWN to check for deadlines.
Just follow this link: Global Countdown (on homepage)

Here is the collection of productions from all participants (in hope that I didn't forget anyone). As usual, if you click on the small upwards-arrow right beside the quoted name, you can jump to the original post and read up on the documentation for this production.


BONUS ENTRIES (submitted after the deadline - you can not vote for it, but feel free to give feedback)


Please consult the last post of how your vote could look like (which links to more sources). And to make it simple for me for counting the votes - please use the forum usernames in your listing. Thank you!

To make it easier on yourself, and more helpful for each participant, maybe focus on the overall production value. What you really liked with the song, what you'd like to see improved, etc.

SWC030 participants giving feedback to each other (to every participant) and casting your vote is mandatory, else you will be disqualified. Please also keep the new game mechanics in mind.


Good luck to all participants!

A big disappointment that there was only two participants. On the other hand, a big relief for not having to give points to each and every participants. It’s always a pleasure to give comments to everyone, but a nightmare to decide who will get least points. Normally it's easy to pick 5 best out of 10, but quite often mentally very hard and artificial process to make an order to positions 5-10.

Cool and scary! This must be a sound track from some horror movie.

I think it’s combination of sounds from the distant past and forthcoming future at the same time.

Is that mother of Norman Bates singing? I guess it must be Norman Bates playing piano in a hallway and Mrs. Bates singing upstairs. Very efficient combination. I get lot of images to my head. I can see all those spiderwebs everywhere.

Maybe not a modern pop, but still full points from me. Actually, I have no other choice for otherwise Mrs. Bates would come to retaliate and haunt me.

Sw030 OlliH Family discussion in the key of love

There is definitely a discussion going on and a good amount of love, your real playing of instruments mingles very well with the itb vst's used.
Overall very solid, you could possibly look at some effects for the organ, just to give it some additional flavour, rotary or some little harmonic treatment to allow it to compete with the guitar.

Olli H wrote: ↑
Tue Feb 25, 2020 09:18 CET
A big disappointment that there was only two participants. On the other hand, a big relief for not having to give points to each and every participants. It’s always a pleasure to give comments to everyone, but a nightmare to decide who will get least points. Normally it's easy to pick 5 best out of 10, but quite often mentally very hard and artificial process to make an order to positions 5-10.

Cool and scary! This must be a sound track from some horror movie.

I think it’s combination of sounds from the distant past and forthcoming future at the same time.

Is that mother of Norman Bates singing? I guess it must be Norman Bates playing piano in a hallway and Mrs. Bates singing upstairs. Very efficient combination. I get lot of images to my head. I can see all those spiderwebs everywhere.

Maybe not a modern pop, but still full points from me. Actually, I have no other choice for otherwise Mrs. Bates would come to retaliate and haunt me.

There's always love, even in horror

First and foremost, I apologize for the late response. As you probably saw, BTS work took a bit of time.


I'm honestly a bit sad and puzzled as to what went wrong this month.

I didn't consider the premise to be a difficult topic. Maybe the audio demos were off-putting, as people thought "I have to match that quality", or "I have to add vocals - so I'd rather not join!". The Pop genre is such a widespread area compared to (let's say) Big Beat (see SWC020 / April 2019), especially if we limit some parameters. But oh well - lesson learned. Maybe SWC031 / March 2020 will result in more participation, as not only the game thread has been overhauled, the "Audio Demos" are also a bit different this time around.

Please excuse the fact, that there will probably not(!) be any suitable score sheet this month - two entries are just not enough. And I really do not want to add "randomized numbers" just to declare one winner. I mean, there is no Winners Podium regardless ("<4 entries" rule).

Both of you submitted something, so you are already winners as you stepped out of your comfort zone.

After listening to both entries, I must admit, the only one who really pulled off "(Contemporary) Pop" is Olli H. Gracing at borderline "Country/Fusion, it is definitely less experimental than Clueless' entry (which, I get that, was mainly posted just for fun). I really wish there would have been vocals with "Family Discussion In The Key Of Love" - I wanted to know more of "the story". But I get the general idea - it does sound very much like a 90s Comedy/Soap Opera summarized.

Now Clueless on the other hand, went way, way more experimental. Pity that it's off-key - else this would have been going more towards what we sometimes hear on the radio today.

Some more feedback on the mix:

Olli H:
I really love the instrumentation, the "Back and forth" between the guitars and the E-Organ. I would have panned this a bit different however. While the Piano and the Acoustic guitars are fairly spread, everything else feels like it's "in center". I might have also treated the piano a bit different (a tad more reverb), but that's just me. The only thing I do not like, is the fact that this gives me 80s/early 90s General MIDI Demo Song vibes - but this is definitely not your fault.

Top tier material, as usual. Please keep it up.

Clueless:
If the vocals would have been tuned properly, same goes for the Piano in the first minute, this might have been a very interesting production instruments that you don't hear that often. Definitely not "(Contemporary) Pop", unless this is what we're approaching in the 22nd Century. Else, this feels more like "Chill-out" (hah - a month early!), especially once the drums set in. Then suddenly, the piano doesn't feel out of tune anymore.

I'm not a fan of the reverb though. It feels too honky, it's too much IMO. I might have actually set up a sidechain for it, to make space ever so often, while still give the instrument an airy feel once they ring out.


Thank you for participating. I hope you still had fun.
See you in SWC031.

Hopefully a better turn out this month, although I'm not complaining about being 2nd, 2 months in a row

Many thanks to Mister Fox for his hard work

Thanks for the insightful comments.

Most of my songs are made around the poems/lyrics written by my wife. But - as I have couple of times shown - I just can’t sing. So, with these competitions I’m rehearsing the use of virtual instruments for the main melodic lines. They still sound a bit too midi also to my ears. But hopefully they are soon good enough for my demo purposes. In the next ”chill out” competition I might try synth sounds. We’ll see what happens. But first I have to create a melody.
Top

Ladies and Gentlemen, here are the results of Songwriting Competition 30

The winners podium consists of:
Apologies for the waiting time, this is not an automated process.

<4 participant rule is not in use (staff comments and votes)
We have 0 disqualifications
We have 0 votes after the deadline
We have 2 users that tied (both Olli H and Clueless have 1x10pt, but Clueless got 1pt more because of giving more detailed feedback)
"Sole (License) Winner" rule does not apply - participants <4 - no Winners Podium

Here are the results as chart in image form: 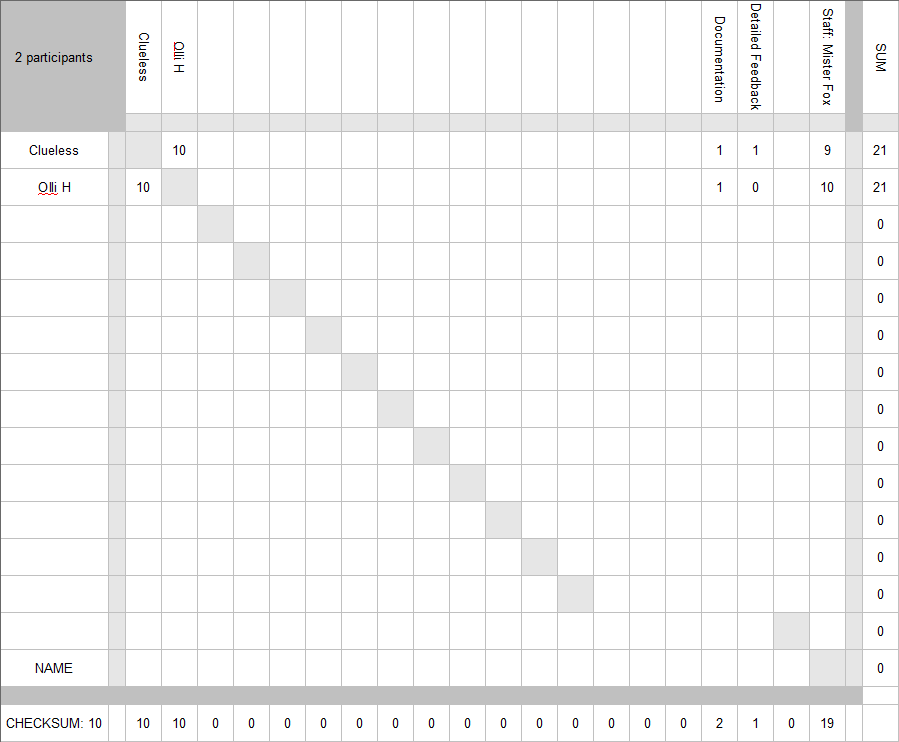 Thank you so much for your participation.

Since there is no Winners Podium, no licenses can be selected.

Feedback about the "Songwriting Competition" is welcome (please do so here).

See you in in the next challenge!
Top
Post Reply
30 posts