2020-JUN-01 Info: Please help spread the word about the Songwriting Competition and help it reach 15 participants per month on average


Mixed in Presonus Studio One 4 Professional

Mix Notes - my goal was to keep this song sounding as live and natural as possible. I used very little in the way of effects. I cut out some of the mic bleed from the guitar and vocal tracks to clean up the mix a bit but left it in the other tracks. It helped keep the mix sounding live.

Drums
Each drum channel treated independently using stock EQ and routed to parallel compression bus where I used Waves H-Comp to slam the routed drums. Also routed the drums to an effects bus with Toneboosters Reverb.

Sax and Trumpets
Stock EQ and H-Comp on the channel. Routed to reverb effects bus and slap delay effects bus.

Hi all,
this is my attempt to mix:

Good luck to all.
VasDim
Top

I worked only with vst.

The track is very nice, most of the work i did was in the drums:

Kick: Phase flip/Eq/Gate
Snares: I apply a compressor to both the two channel, after that i grouped together and: Gate/Comp/Eq/Widening up a bit the stereo signal with an Imager
Hat: EQ/Imager
Toms: All grouped together EQ/Gate
Room:Comp/EQ/Sidechain Comp with Snare track
Overhead: EQ/Comp/Phase flip
Drums Bus: Comp/Subtle gate to expand dynamics downward/Subtle Saturation/EQ/Vst called Soothe to keep under control some resonances

Horns bus: EQ/Comp/Sidechain Comp with Vocals/"Soothe" to keep under control some resonances

Aux: 3 Different Reverbs one for drums, one for vocals, one for horns.

Hello all, another fun one to mix.

My main thing with this mix was to keep the bounce feel while mixing this song. I spent more time on the keys and GT tones than I would of liked, but these are the sounds I ended up going with. I check for phase problems on drums did some track clean up along with automating instruments in the different sections and some editing on the vocal lines to tighten them up.

If you have any question or tips let me know.
Top

Hello everyone, newbie in forum and english hehe

I really enjoyed mixing this song, a style that I like a lot, but that is not widely available here ...

I tried to average between what was said in the file with general words about the music, the official mix and trends of my mixes.

In all the tracks I used SSL Duende Channel, in this song I used only his equalizer. All the tracks were equalized, I did not consider that the recording required great correction movements, so my eq was basically to increase a little the average region pro signal to get more consistent in the compressors.

I had 4 reverbs (2 plates, 1 concert hall and a Hall) of the Lexicon PCM Native package, and a delay of the same package in Trumpet Lead.

I did a lot of automation on all the tracks.

Editing:
1. (3:10-3:16) Fill before the last chorus was missing the TOM close mics, so I cut samples from earlier in the track and addd them in. I felt the fill really sounded flat without them.
2. (3:12) Two Kick Drum transients clipped in the same fill. I replaced them with smaples from earlier in the track.
Screen Shots linked here ----> https://www.dropbox.com/sh/e4tgu255rfa8 ... 6P8va?dl=0

Mixing (stage 1):
Used my standard mix template, minus NLS across each track and on BUS
Has NY compression sends for each group (VQ4 into CLA-76) and has my fave VERB (Waits Room, VerbSuite), PLATE (Abbey Road), DELAY (Repeater) and CRUNCH (Kings Mics + Sausage Fattener) channels all ready to go.
Routing is roughly TRACK + NY to SUBMIX, SUBMIX + FX to 2BUS

Mixing (stage 2):
Created STEMS using my Joe Meek Stereo Compressor w/ M/S width control to position SUBMIXES in the stereo image and lightly compress some of them for character and punch.
(note, I created a STEM of Drums w/o KIK, then a mono KIK STEM and an additional solo SNR STEM for the final mix.)

Mixing (stage 3):
bxCONSOLE E series on all STEMS, except HORN stem (bx CONSOLE N series)
some compression and eq on all STEMS using CONSOLE plugins
Logic EQ on Drums
Logic Comp on Drums and Horns
CLA-76 on Keys
VMB - Gate, Stress, EQ and 76 pre on Snare Double
F6 on Drums to tame HAT and accentuate SNR
F6 on VOX to de-ess a few spots
bx-Room on 2BUS for a touch more verb
Black Box on 2BUS for a bit of tasty saturation.


MIX peaks at -3 in LOGIC and still has room for more spatial and tonal adjustments if it were to be mastered.

Thank you for the opportunity and thank you for listening. Mixing this was enjoyable and the song is well written and arranged nicely. Some fun mixing challenges hidden within, as well!

[moderate="Mister Fox"]I've removed the mail addressed from this post. This is a public forum - please use the user control panel and update your profile if you want to share your personal information. But please do not do that in the thread.[/moderate]
Top

I am happy to announce the following sponsors for the Mix Challenge audio community: 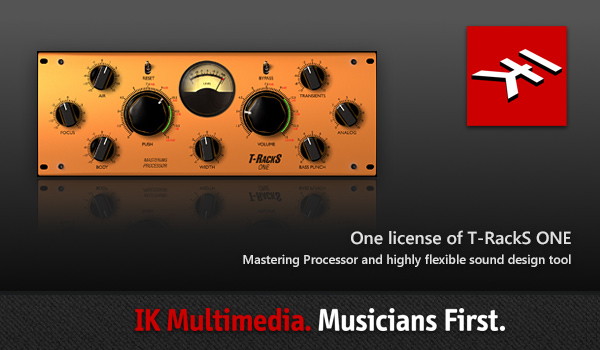 IK Multimedia is kind enough give away one license of T-RackS ONE to the winner
License will turn into NFR
More info on IK Multimedia: https://www.ikmultimedia.com


IK Multimedia has been with the Songwriting Competition since SWC015 - November 2018. They renew their partnership with a different set of tools, suitable for the Mix Challenge.

A huge thank you goes to IK Multimedia for providing the licenses.

Thanks for listening …. her is my try

every track has true iron and sheps omni channel on it.

A/B is my always on Plugin while Mixing…

Hi,
This is my first post on this site.
Forgive my English (i'm french).

We hear the sound of the pedal of the bass drum on the tracks of battery so also a little in the mix ...

Bass: Saturation. 8K lowpass and hpf at 120. Boosting around 700hz and 90Hz. De-essing 4.5K and 280Hz. 5db of gain reduction with fastest attack and slowest release. Devil-Loc adding some distortion. Gate that's sidechained to kick(opens with kick hits) and blend that in just subtly

All vocals goes to ALLVOX bus before master fader and instruments go to ALLMUSIC bus, and and Allmusic bus has EQuivotate that was Eq matched to vocals with -15%